Outsiderland presents ‘The Resurrection’; the biggest comeback of the year. After a very unfortunate theft that threw a spanner in the works of the original show, Youssef Boucenna and Susan Kooi have risen from the ashes and once again bring us a candle and ceramic show in full bloom. Both artists were linked by Outsiderland because of their shared love for philosophy and monstrous forms. From two completely different backgrounds, Susan studied at the Rietveld and Youssef, through many sometimes literal wanderings, ended up at Makom, a walk-in house and art studio of the Regenbooggroep in Amsterdam. They are now joining forces again especially for Outsiderland and, ofcourse for the many thousands of compassionate fans and supporters. 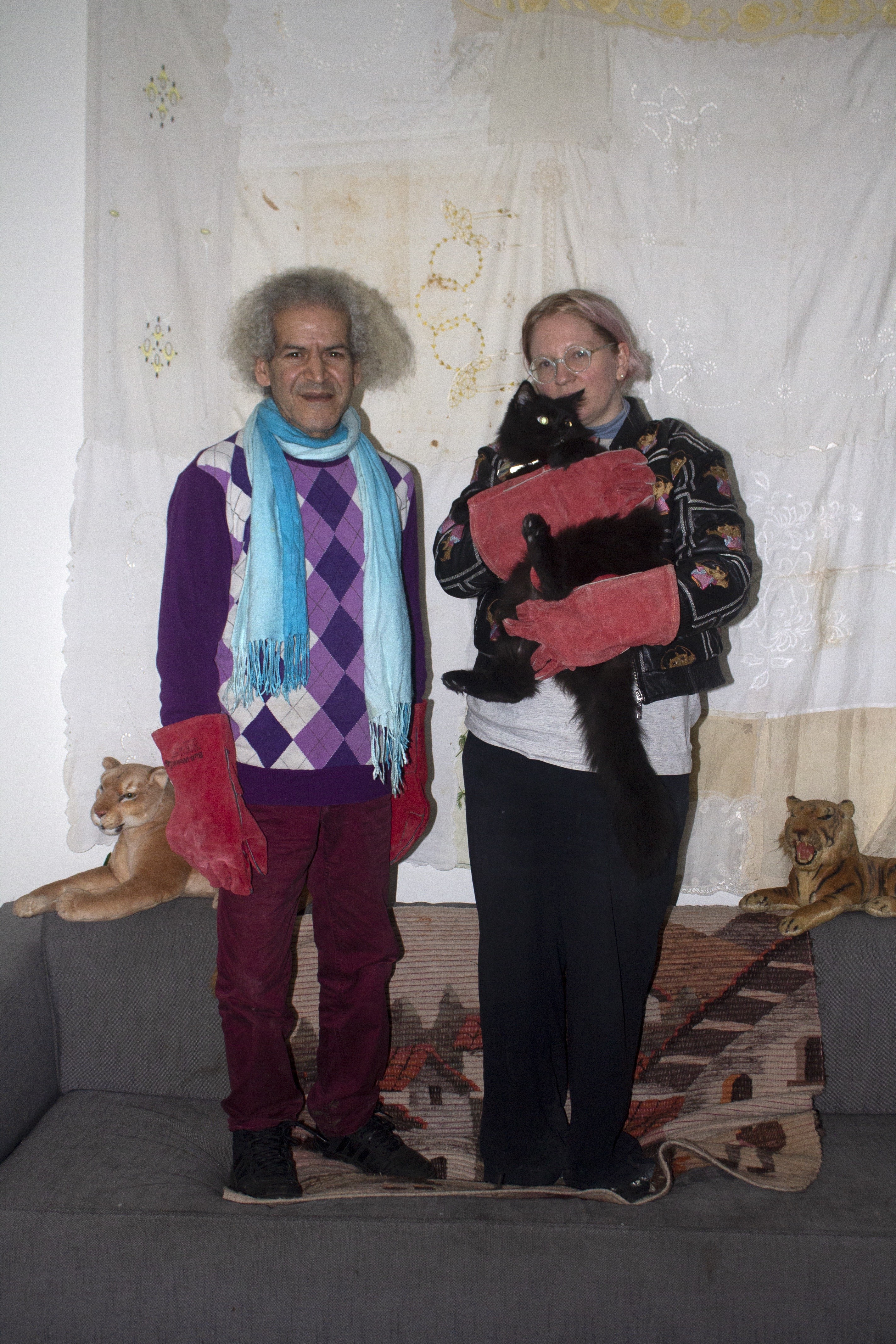 The name of the exhibition already reveals it: a lot preceded this quite literal resurrection, just like in the Bible story. In case you didn’t hear it at the time: what should have been a philosophical Christmas show once, was interrupted by a very Twin Peaks-esque theft in which all the pieces the artists had been working on for the bigger part of a year, eventually leading to this delayed bloom. The sadness and disbelief, and the world fame (At5, Parool) that followed at the time, were surprisingly quickly exchanged by both artists for an almost inexhaustible urge to continue, to come together and start creating again. Even though somewhere in town there might now be someone with boxes full of stolen ceramic candlesticks and monster candles, that didn’t mean the rest of the people couldn’t see them anymore. And besides, Easter was coming up anyway.

In the original exhibition, called Christmas Problems, Boucenna and Kooi, who are both artists and part-time philosophers, discussed the philosophical question of what Christmas really means, how fluid the concept is. It would all depend on the people and their cultural or social circumstances and, according to Boucenna, was driven by the universal concept of light, something he realized during the years he lived on the street, and by the spirit of Christmas that lives within yourself.

A few years later, Susan Kooi came across Boucenna’s unusually shaped candles in the Rainbow candle shop where he worked at the time. She fell in love instantly but learned that the ready-made, mold shaped candles always sold best, leaving the non-molded candles to serve mostly as store-decoration. When the two finally met in real life in the spring of 2021 thanks to Outsiderland, they decided to join forces.

Previously, Kooi traveled to Italy, Portugal and Japan to immerse himself in different traditions of ceramic handicraft. With her project, she reflected on how artifacts have a certain meaning during their lifetime and then are carriers of meaning and interpretation in the future. The works she creates with Boucenna, plus his candles, could be just that. 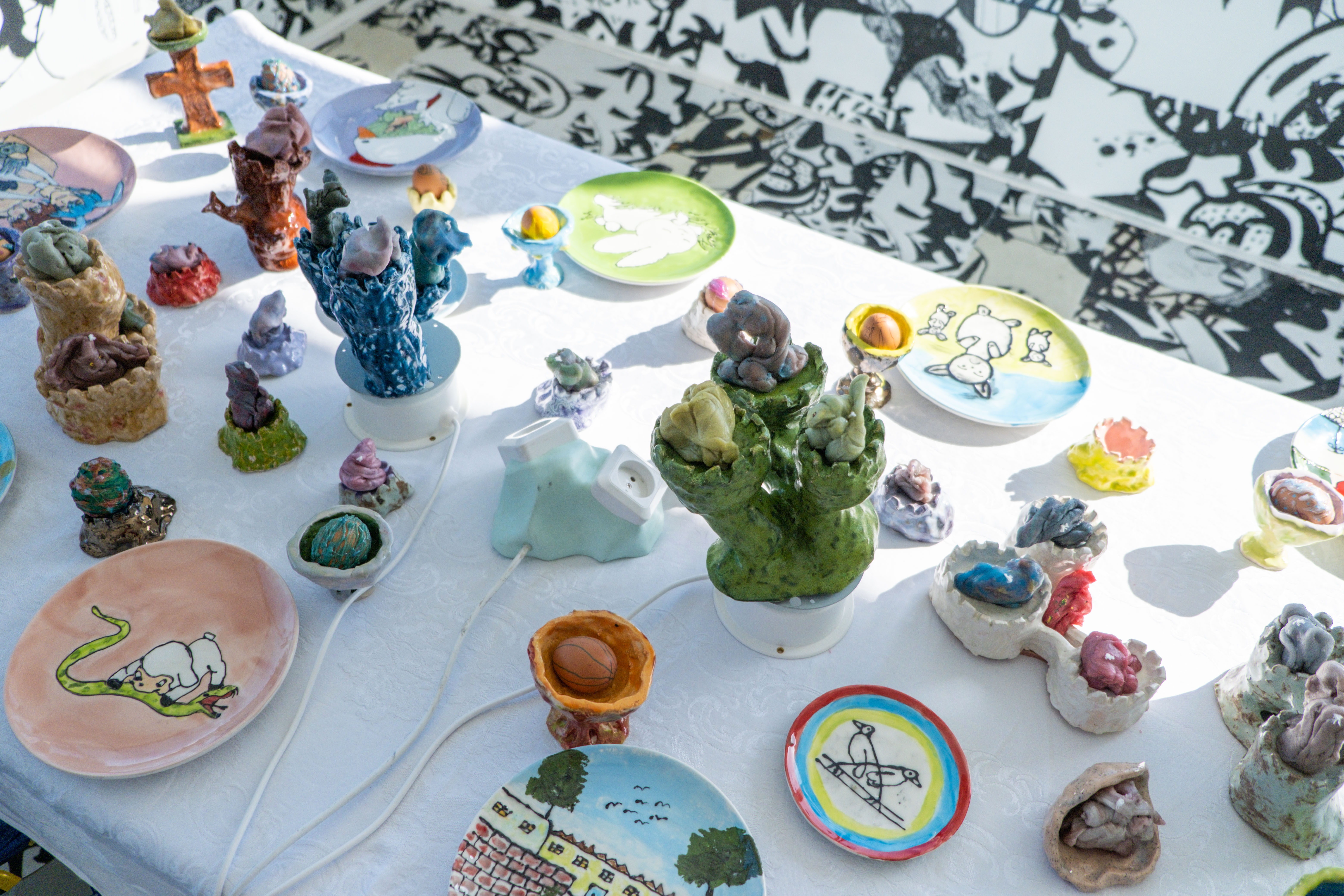 And so finally there was The Resurrection. Besides the Biblical story in which Jesus miraculously reappears, albeit in a different form, this resurrection or re-birth is also multi-interpretable in nature and not necessarily biblical at all. The exhibition marks the Easter season and the beginning of spring, the time when many things come to life. It is a time of fertility and optimism and hope. It is the time of possibilities and miracles. Now, of course, the artists didn’t have the magical superpower to conjure back the stolen work. But in some way, they did. Because their work came from nowhere else than from their hands and hearts. And so, Boucenna thought, they had to get right back to work. With only a few months left to revive the project and start claying, they decided to keep the original idea of ​​a large set table. But in addition to the candlesticks, wine glasses and plates, ceramic egg cups were now also added.

However much The Resurrection may be multi-interpretable, a fixed fact in spring and during Easter unquestionably are (chocolate) eggs. And hunting for them. So, if you find yourself on your knees in the bushes, frantically scanning for those eggs, would you maybe also pay attention to those stolen brightly colored candlesticks and monstrous candles that you just might encounter there? We would so very much love to see them again. 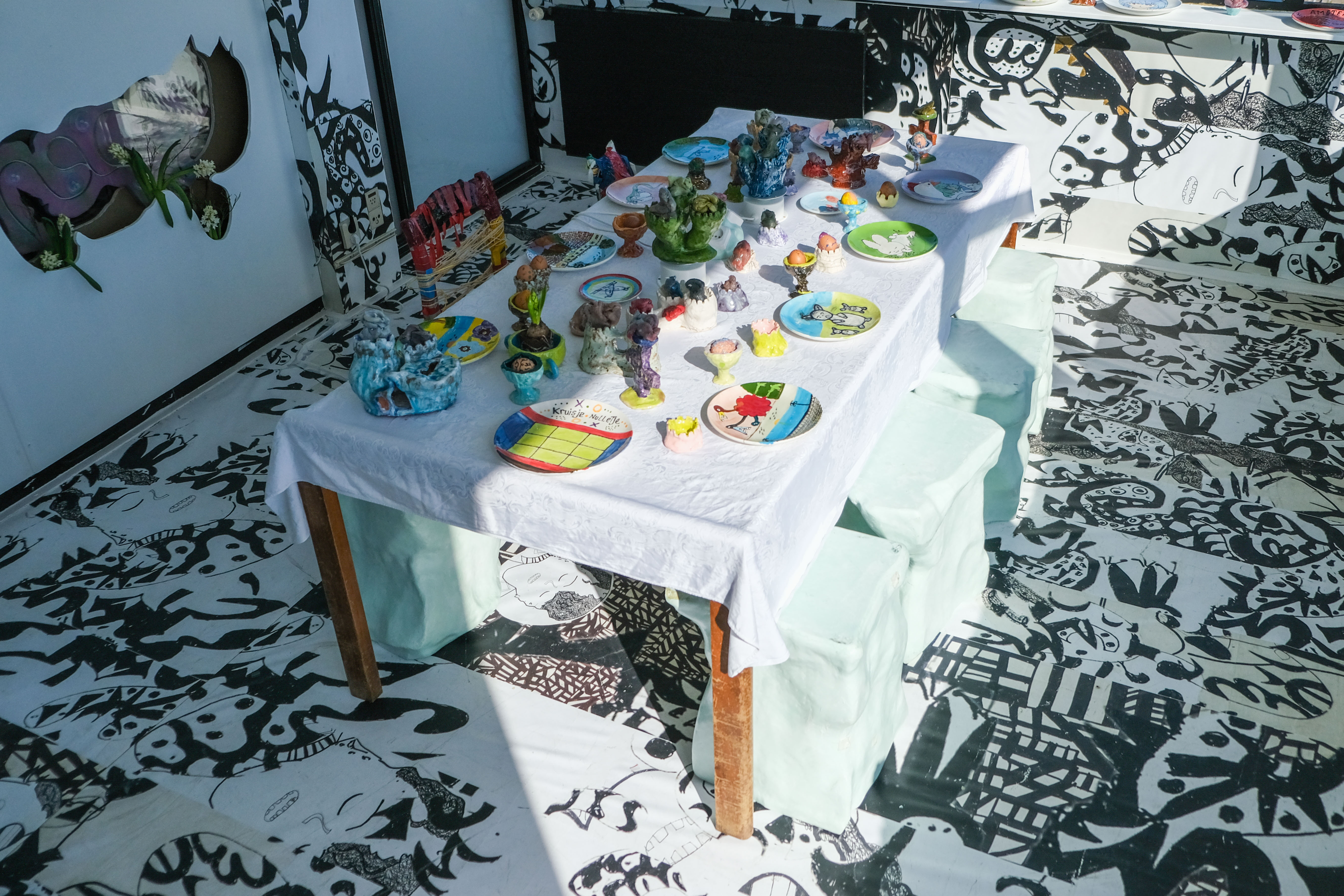 Susan Kooi graduated from the Gerrit Rietveld Academie, Amsterdam in 2012. Since then she has been active as a multidisciplinary visual artist based in Amsterdam. Alongside her individual artistic endeavours she is also part of the performance duo echo+seashell and a founding member of artist initiative Samet Yilmaz. Susan attends the philosophy pastorate of street pastor Hanna Wapenaar in Amsterdam.

Youssef Boucenna lived on the streets for 25 years before coming to Makom, the art atelier of the Regenbooggroep, where he started crafting and selling unique candles in the Regenboog candle shop. Now that the shop is unfortunately closed, he started working with ceramics for the first time in the spring of 2021. Every Tuesday, Youssef attends the philosophy pastorate of street pastor Hanna Wapenaar in Amsterdam, where he also sings in a choir.